Which Subaru head gasket is best?

If you’re finally going to have your head gaskets done on your Subaru it’s only smart to choose the best possible gasket available.  For a while, the only option was a genuine Subaru head gasket. Now we offer a solution that is arguably better than anything Subaru currently has to offer for the Phase 2 2.5 engine. Plus you’ll no longer be required to install the Subaru Coolant Additive to your cooling system. Stay tuned for more detail as I add to this blog or stop by in person for more info. 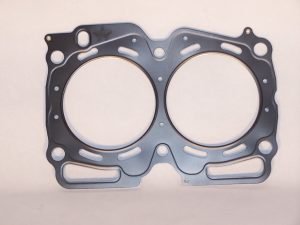 Six-Star® Head gaskets are a multi-layer stainless steel head gasket engineered to ensure years of longevity for your Subaru.

We believe so strongly in these gaskets that we exclusively use Six-Star® brand head gaskets on all of the Phase 1 and Phase 2 2.5 engines we repair at Smart Service.  In over a decade of using the Six Star gaskets, we’ve seen great results with longevity.  We’re so confident in these gaskets, we cover them with a 3 year/36,000 mile warranty when we install them.

We all know that head gasket failure is one of the biggest headaches you’ll ever run into on your Subaru. We only use Six-Star® gaskets at Smart Service when we perform a head gasket repair because we want it to be the last time you ever have to replace your head gaskets.

In comparison to the original single layer head gaskets your Subaru originally was equipped with, these head gaskets are comprised of three layers of stainless steel. Stainless steel is used for added strength, it’s ability to rebound, and it’s natural resistance to corrosion.  They are constructed of 3 layers. The inner core is a layer of flat stainless steel sandwiched between and riveted to 2 layers of .010 embossed stainless with a flouroelastomer Viton coating.

The Viton rubber coating is one of Dupont’s high performance elastomers. In technical terms, Viton flouroelastomer rubber based material will easily handle temperatures from -40° to over 400ºF with the ability to withstand temperatures up to over 700°F for short periods.

The composition of these gaskets along with the interlocking embossments create unsurpassed sealing properties making Six-Star® Head Gaskets the ultimate choice for your all aluminum Subaru engine.

The unique design and properties of the multi-layered stainless steel gasket combined with superior ability of the Viton coating to withstand heat, chemicals and corrosion, it may be last head gasket replacement you’ll ever need for your Subaru engine. Not to mention, you’ll never need to use the Subaru Coolant Additive ever again on your engine.

If you’ve been told your Subaru head gaskets are failing, give us a call or stop by.  We’re always happy to take a look, and discuss options.  Once you’ve made the decision to go forward with the repair, know we’ll give you the best, long-lasting repair possible.